The Straight and Level

Our second story renovation project(s) have been progressing rather slowly lately. After we installed the drywall in the two bedrooms in May, the next phase of the renovation project began. As you know, I've spent a few weekends cleaning up blown-in insulation and knocking down the old plaster and lathe in the hallway. We have finally progressed past the point of demolation, and we can begin building-up again.


I had been prepared two weekends ago to remove the plywood subfloor and tile in the hall. Once I lifted one of the plywood sheets though I found the reason the subfloor was there at all. Luckily, I did not find a pack of rabid opposum, or a used mail-order taxidermist assistant's kit, or a space/time rift under the subfloor. But the original floor boards are warped to such a degree, that the triangular 2x4 ribs which brace and level the plywood subfloor measure up to 4 inches on the lowest side. I quickly put the subfloor back, then slowly took a cautious second look.

If I were to fix the slanted original floor, I would do what has already been done. Therefore,...
Amanda is taking over this post, since Jim has been too preoccupied with actual renovation to finish his draft. :)
Jim has decided to leave the already leveled part of the floor alone, and we will just build the rest of the floor up to that point.  This means that Jim does not have to remove any of the tile. 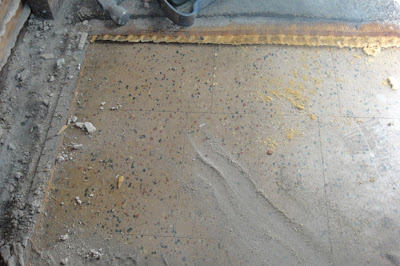 Jim has since leveled the ceiling but not the floor (will be explained in future posts). 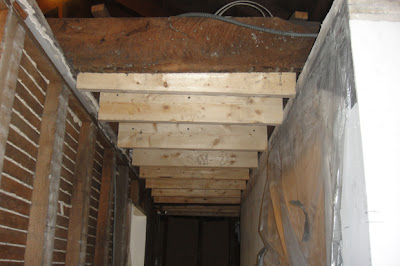 Don't let the old beams fool you, the new wood is what is level.
While Jim was removing the plaster and lath from underneath the one and only hallway window, he came across an interesting find...
An Old Beehive With Layers of Honeycomb 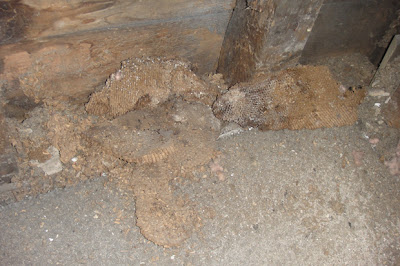 Alas, no honey.  This was a very old hive from the looks of it.
With the help of Jim's parents, we were also able to finally install the fold-up attic stairs that we purchased months ago on sale.
The Frame 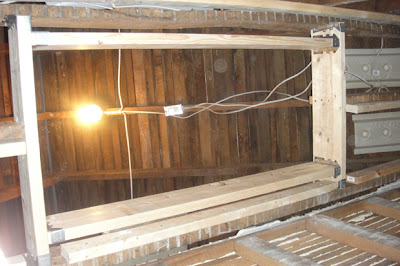 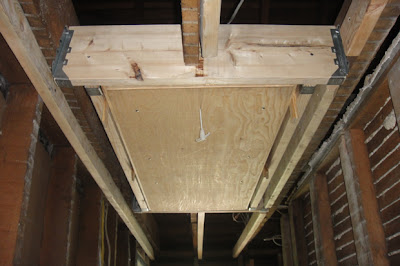 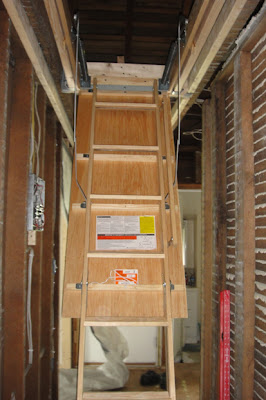 It is so much easier to get up into the attic now.  We are both really glad that we decided to do this.  The previous attic access was very small and inconvenient.  No fears, we have purchased fire-rated drywall for the stair's "lid" as per code.
We would also like to share with you the pics of our doors for the nursery and guest rooms. 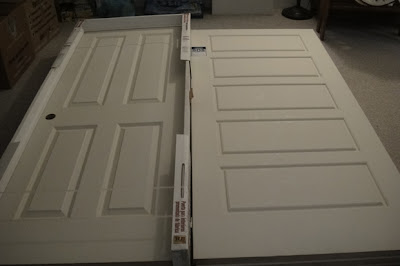 The pre-hung doors on the left will be the style for the bedroom doors.  I noticed that the original doors in the house (of which there seem to be only 2- not counting the french doors) are both 4 panel doors.  These were the closest match we could find in our budget without actually buying vintage doors.  The doors on the right will be used for the sliding doors in the closets.  These are also styled after vintage doors, and Jim really liked the look of them.  We bought them a few months back when Lowe's was having a sale on custom doors.
Posted by James at 4:57 PM