We have continued our work on the well weed deforestation project.
These are pictures of what the area looked like after we finished pulling up the weeds and raking up the lava rocks. 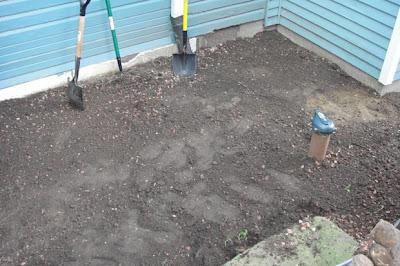 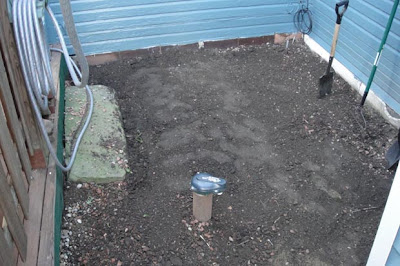 And here is the area after putting down the weed barrier. 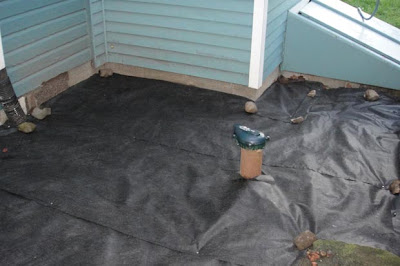 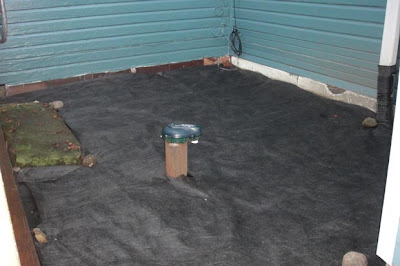 The next step is buying the gravel to put on top of the barrier.  So far, we've only checked out Lowe's.  Who knew rocks could be so expensive?  Maybe we're just frugal.  LOL!
We've also been working on the upstairs.  This past week, we've measured the rooms and hallway for trim (baseboards, window and door trim).  We've ordered it from Galehouse Lumber and it should be delivered in about 2 weeks.  We'll hopefully be ready for it by then.  We still have a little bit of mudding to finish in the hallway, but then we can start the priming and painting process.  I can't wait!  I think my subconscious is waiting for paint to be on the walls before it will let my pregnancy nesting drive kick into gear.  We decided to go with the same style baseboards that we used in my craftroom.
Posted by Amanda at 10:11 PM No comments:


Our humble little blog has been discovered by the people at Be @ Home.  This is a website that has awesome little articles about home and garden decorating.  You can find their website at:
(http://pocketchange.become.com/category/home-and-garden .
They contacted us to be featured on their Best of the Web.  This is a page that features blogs around the interwebs that have caught their eye.  We felt honored to be considered.  :)  Here is the link:
http://pocketchange.become.com/2011/08/best-of-the-web-be-home36.html .
Our blog is mentioned about 1/2 way down the page.  Since the feature went up, we have had over 100 new blog views.  No new followers or comments yet, but we'll take what we can get.  LOL!  :)
Posted by Amanda at 9:51 PM No comments:

Our poor yard.  It is a bit neglected because we have been concentrating on the inside of the house so much.  Plus, because of the new septic installation, it already looks battered.  We decided to take a weekend and give the yard some much needed attention.
Our first task was to remove the weeds from around the water well area.  The weeds were so bad that it looked like we were purposefully growing a weed garden...NOT that kind of weed!  LOL!
This is what it looked like. 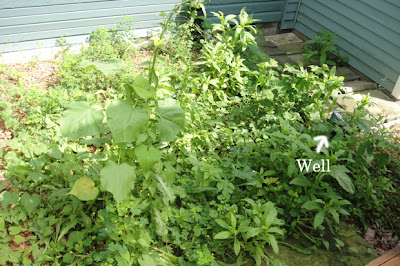 I drew an arrow so you could see the well amongst the weeds. 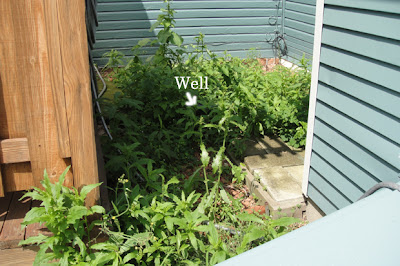 Once the weeds were removed, we raked up all the red gravel in the area.  We plan to put a weed barrier down to try to prevent the weeds from returning.  Since I didn't like the look of the red gravel against the blue of the house, we transported all the gravel to the back of the yard to surround the firepit.  It looks a lot nicer back there.  We'll probably put grey or white gravel over the weed barrier.  I'll make sure to take a picture of it once the project is complete.
Our Snowball Bush might not have survived this spring and summer, but our Mimosa Bush is thriving in this heat and rain. 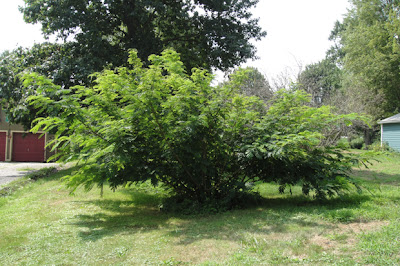 In fact, it is doing a little too well.  We need to restrain some of the heavier branches so that they don't break off.  Hmmm...I wonder when we'll have time to do that!
Another task we did that weekend was to cut down some of the webworm webs in our trees.  They especially seem to love our black walnut tree.  Some of the webs were too high for us to reach, but we did get all the lower ones.
Here is what they looked like. 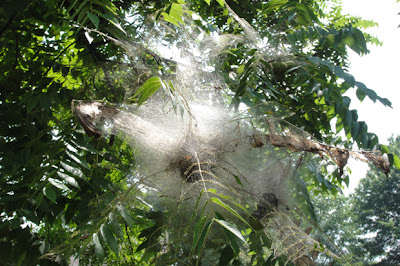 Ick!  Creepy looking, aren't they?  They remind me too much of spider webs, and I'm afraid of spiders. :( 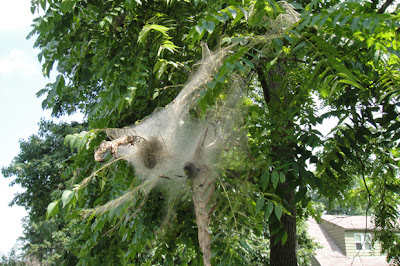 Since I'm on the topic of bugs, here are some more for you to see.
Some Type of Fuzzy Caterpillar 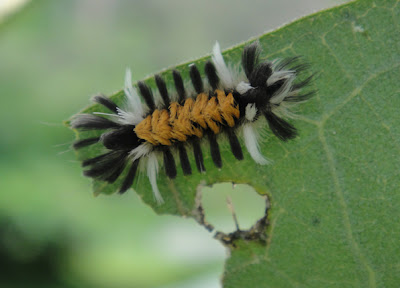 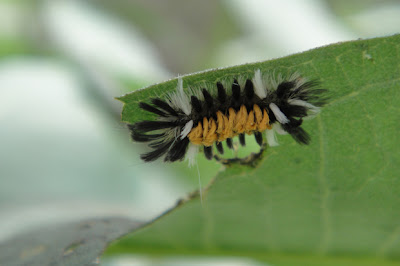 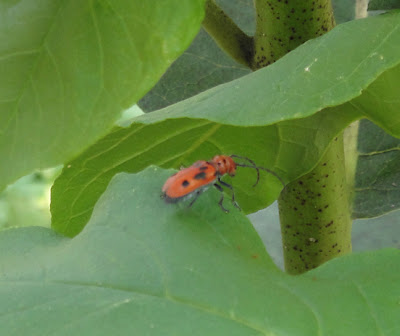 He wouldn't stay still for the camera, little bugger!
Posted by Amanda at 12:14 PM 1 comment:

The mudding for the drywall has been progressing.  Both the Nursery and Guest Room might be complete by the end of today.  Jim and his mother are currently upstairs mudding as I type.  I'm not much use to them at the moment since I am now 32 weeks pregnant.  I'm not allowed on ladders, and I can't bend over easily; so I would just be able to mud in the middle.  LOL!  I would just be in the way.
Here is a shot of them that I took this morning in the Nursery. 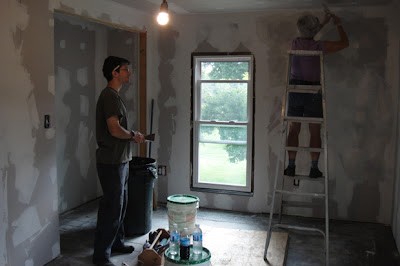 After the bedrooms are complete, all that is left to mud is the hallway.  We want to have everything mudded before we start to prime for paint.
Jim has continued to work on the new hallway closet and built-in.  We went to Building 9 to see if we could find any discount doors and drawers for the project.  It was a success!  We managed to find a 3 panel door we liked for $30, matching cabinet doors for $10 ea, and $5 for a drawer front.  Sorry, no pictures yet of the doors, but I do have one of the closet framing. 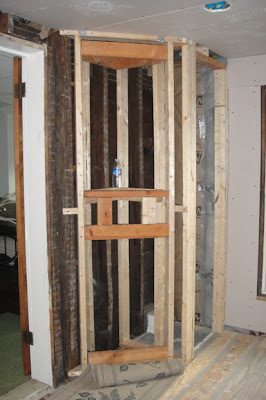 The bottom part will be cabinets.  The middle is where the fake drawer will be, and the top will be open shelving.  That is a peek into our Master Bedroom on the left.
We have also finally installed the fire-rated drywall for the attic stairs.  I actually screwed it in place while Jim held it up. 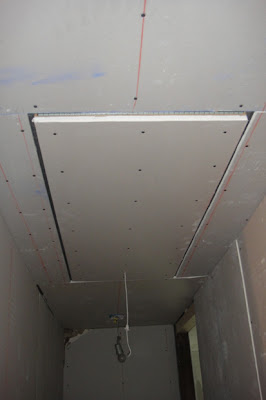 Because an old house always has a trick up its walls, we recently had to replace our kitchen light over the sink.  The previous owners had installed a fluorescent workbench light for over the sink at some point.  The kitchen isn't one of our top priorities at the moment, so we just left it like that.  Well, one of the lights burnt out  and wouldn't work even with a new light bulb.  After a bit more fiddling, we decided to scrap the whole thing (it was ugly anyways) and traipsed over to Lowe's to peruse their clearance rack.  We were delighted to discover that they had a 3 pendant light fixture on clearance for $25.  Score!  The fixture didn't include the glass pendants, so we had to buy 3 of those.  We ended up still paying less than what the original price of the fixture would have been, so we're happy.  Oh, and in case you were wondering...Yes, Jim did have to fiddle with the wiring since the previous owners did it wrong.  Surprise!  Surprise!   Not!
Here are some pics. 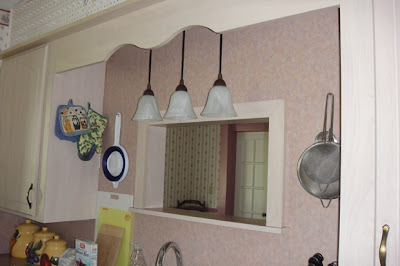 Of course, now the rest of the kitchen looks really sub-par with these new stylin' lights. 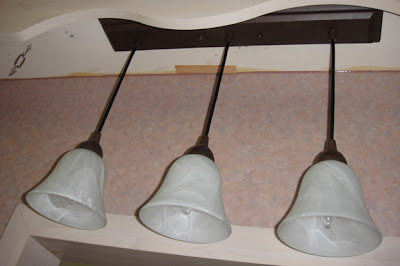 Now that the drywall is completely up and the mudding is nearing the end...at least in the 2 bedrooms...I've been stalking the aisles of the local hardware stores for paint samples.  It was a grueling competition for the color swatches, but in the end, there could be only one!  Well, actually 6 if you count the 2 bedrooms, 1 hallway, and 3 ceilings.  ^_^
Here is a taste of the culling 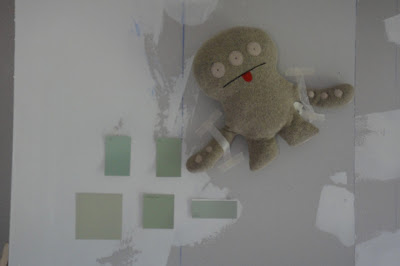 These were the finalists for the nursery.
(Yes, that is an Ugly Doll in our color selection.  We just really liked his coloration.)
Haha!  I know, we are weird.  Poor, Enishi.  ^_^
These were the winners:
Nursery
Walls: Light Sage (Olympic Paint)
Ceiling: PaleVista (Olympic Paint)
Guest Room
Walls: Lilac Time (Olympic Paint)
Ceiling: Windsor Haze (Olympic Paint)
Hallway
Walls: Lyndhurst Timber (Valspar Historic Paint)
Ceiling: March Ice (Valspar Paint)
Jim and I agreed on the general color for each area (ex: grey-tinged purple in the Guest Room, green in the Nursery and brown in the Hallway), and I then picked out the specific colors.  Jim gave his final approval afterwards.  I think it worked out well.  I used the same method of elimination when I picked colors for the Craft Room.  I would put all the color swatches on the walls and see what they looked like throughout the varying times of day.  If I didn't like how a color looked, down it went.  The method must have worked well because I've gotten a lot of compliments on the colors of my Craft Room.  You can see pics of it in the Before and After Section of this blog.  Speaking of which, I can't wait until I can add the After pictures of the Nursery, Guest Room and Hallway.  Hopefully, I'll be able to by October.
Posted by Amanda at 6:32 PM No comments:

I forgot all about the extra service agreement that we signed with the contractor who installed our septic tank. During the day when our new system was installed, and while our yard was churned-up, a third guy came to our property in order to assess the soil. Most of the time, he was digging holes and trenches around the back yard; although, I did see him with a bicycle pump once or twice. He told me afterwards that we had a few pookas and a fire breathing dragon underground. He was able to get rid of the infestation by inflating them until they burst! Shown below is a photo during that work day. 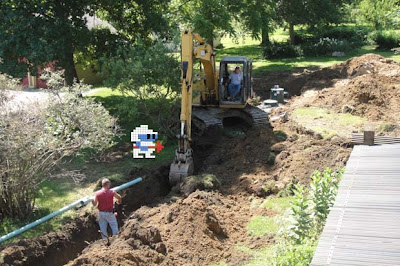 I can't believe I nearly forgot about good old Dug.
Posted by James at 11:17 PM 1 comment: