Happy Anniversary to Us!

January 19th marked the 1 yr anniversary of us becoming first-time homeowners.  :)  Yea!
It's hard to believe that we've lived here for a full year.  I visited a local bakery and picked up a treat for us to help celebrate.
Yummy Cake! 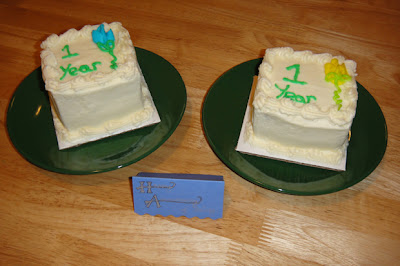 Thanks, Ann's Pastry Shop!
The holidays and snowy weather have prevented us from making much progress on the house.  We're hoping that the pace will pick back up again if this weather gives us a break.  I'm tired of being cold and not seeing walls on the walls.  :)
On the bright-side, the fans that I mentioned in a previous post arrived a few weeks ago.  We've inspected them and they seem ok.  We won't know if they work though until we can install them.  They look gorgeous!  I'm looking forward to seeing them on the ceilings.
January was mostly consumed with leveling the walls and ceilings in the nursery and guest rooms.  This was quite a tedious task.  We were able to repurpose some of the lath that we had removed from the plaster as shims.
Jim working on the ceiling 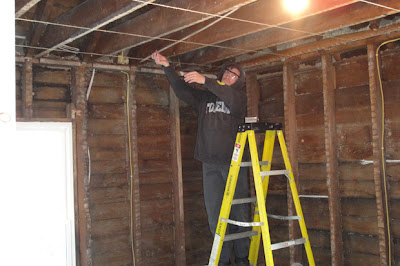 I'd like to take this time to thank my dad for giving us a HUGE spool of twine.
Since there is virtually no insulation in 1/2 the upstairs, it has been a very cold working environment indeed.  It has been so cold that a thick layer of frost formed on the nails sticking out of the walls.  Yikes!
Frosty Nail 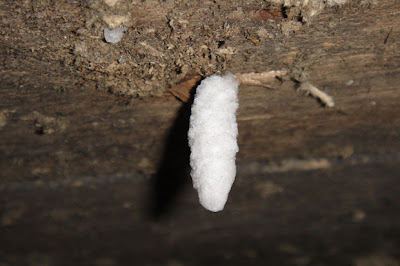 I must confess that poor Jim did most of the leveling by himself.  (I hate being cold.  lol.)  Maybe this makes up for me having to do most of the demo of the plaster by myself back in October.  Yeah, that's how I'll look at it.  ;)
We were also busy in Dec/Jan with constructing the new closets in the 2 rooms.  The closets are basically back-to-back.  Since the guest room is quite large (15x15), we decided to sacrifice some of its square-footage for the nursery closet. 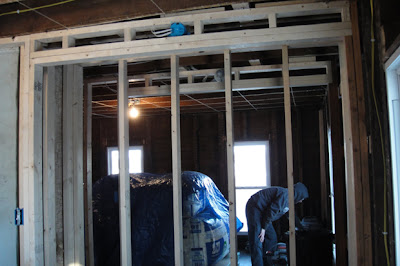 This is looking from the nursery into the guest room.

We were finally able to start putting up the insulation on the walls.  We had some last minute delays, of course!  We discovered that whoever dispensed the blown-in insulation in the attic, failed to protect the soffets/eaves from getting filled.  This meant that if we wanted our attic to be properly ventilated, we had to attempt to scoop out as much of the stuff as we could.  Grrrr!  I thought I was done with the stuff for those two rooms, but NO!  It still had one more round to go.
Well played, Cellulose.  Well played.  >:(
Despite the delays, we did manage to get most of the insulation up on the exterior walls. 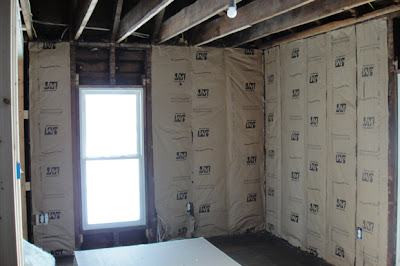 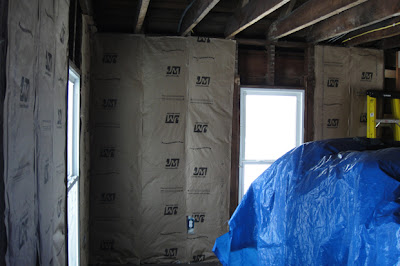 The insulation for the attic is underneath that blue tarp.

The temperature in those rooms has not really warmed up much since the weekend due to this! 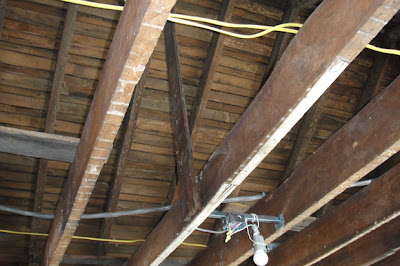 All the warm air can escape right out the attic!  Hopefully we'll be able to finish the walls and at least start on the ceilings this coming weekend.  Anyone interested in helping out?  I know, I know.  Fat chance since it will be Super Bowl Weekend...or at least I think it will be.  lol.  Can you tell we don't care much about sports?  ^_^*

Once all the insulation is up, we can start on the drywall!  Yea, how exciting!  We're hoping some people will volunteer to help us with that.  (Hint!  Hint!) lol.

On a different note, we've had some trouble with one of the neighbors.  The neighbor 2 houses down from us likes to just let their dog outside without any kind of restraints.  The dog has no sense of boundaries, and it frequently wanders into our yard.  This irks me quite a bit.  How irresponsible!  I probably wouldn't mind so much if it was a friendly dog, but it's not.  It hasn't outright attacked us, but it definitely lets us know that it doesn't like us on "his" territory.  Jim and I were walking back from our firepit one night in the fall, when out of the darkness, this dog runs to within a few feet of us and starts barking and growling at us.  The dog was between us and the house.  We stood there for what seemed like several minutes.  Every time we'd try to move, the dog would move closer to us.  I finally yelled out to the darkness, "Will you come get your dog!" in hopes the owner would hear me.  And what do I hear in reply?  A very angry and how dare I yell at them voice, "I'm trying!"  I almost yelled back, "Bull$*&@!"  This dog had been barking and growling at us for several minutes without any attempt from the owner to retrieve it!  That pissed me off!  We haven't had any other confrontations with the dog like that since, but I have seen it in our yard on several occasions.  I've videotaped it when I've seen it.  I'm not sure how the law works around here concerning dogs at large.  I don't know if we can just complain to the authorities about the dog, or if the dog has to currently be in our yard when they arrive to investigate.  The last time we saw the dog in our yard was about 2 weeks ago.  I looked out our front door, and the dog was standing on our stoop looking inside!  It immediately started barking and growling when we noticed it.  Jim was fed up with the dog by this point, and immediately put on his coat and went outside.  He couldn't get close enough to the dog to grab its collar, so he just started walking towards its owner's house.  The dog followed him barking the entire time.  He knocked on the door, and an elderly lady finally answered.  He asked her if the dog was hers, and she said it belonged to her daughter.  Jim told her that the dog has been repeatedly wandering in our yard, and that the dog needs to be properly restrained.  She apologized and said she would take the issue up with her daughter.  So far, we haven't seen the dog in our yard since.  If I do see it in our yard though, I will call the authorities.  I refuse to be afraid to go into my own yard when that dog is outside!  I just want to be clear that this post does not concern our immediate neighbor's dog, Bosco.  Bosco is a friendly dog, and whenever he is outside, so are his owners.  If he does come into our yard, he is immediately recalled.

Whew!  Sorry, I just had to rant about that.  Now on a much lighter note:
Jim has been up to his old antics of making snow creatures.  He is so creative.  Here is his latest creation. 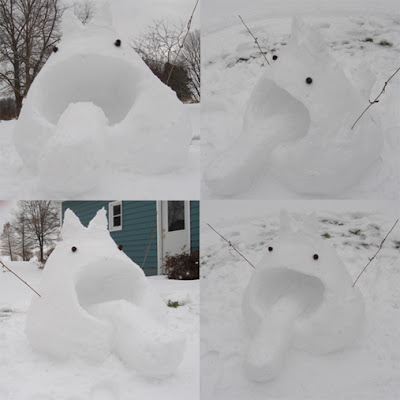 Here is Jim posing with it. 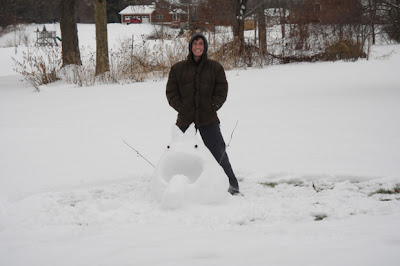 It has probably become a solid chunk of ice now due to all this freezing rain we had today.
Posted by Amanda at 11:33 PM No comments: