Apparently, we've been super productive this month.  Once more, my in-laws came up on Sunday and helped us to install the hallway drywall.  I am once more amazed at the progress.  They are drywall installing gurus or something.  Our upstairs hallway is actually starting to look like a hallway.  :)
Here are some pics of their work. 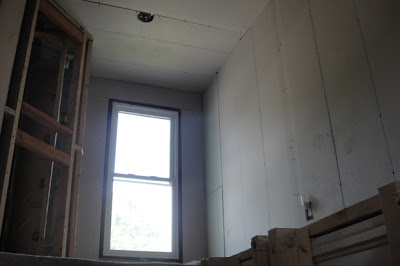 Looking up from the stairwell 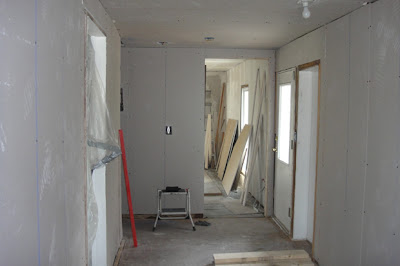 Looking down the hall toward the Nursery 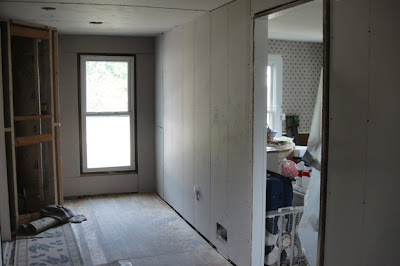 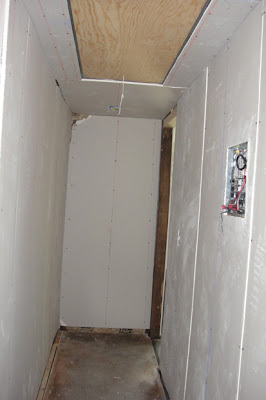 Looking down the hall toward the Guest Room
There is only a little bit left to drywall and then the mudding can begin in the hallway.  Yea!
Of course, after all the drywall was up, Jim noticed that the illuminated switches in the hallway didn't seem as bright as they should be.  Jim checked it out, and he discovered the the current was active even when the lights were in the off position.  Hmmm...not good.  He was afraid that maybe a drywall screw nicked a wire or something, but he couldn't find any live screws.  He did some more investigating.  Fortunately, it was a simple fix and he didn't have to take down any of the drywall.  It turns out that the 2 switches at the top of the stairs were faulty.  He has since removed them and will replace them.
We recently had our water tested for bacteria by Davis Water Treatment for peace of mind.  Ever since our septic failed, I've been worried that our well water was contaminated.  I've been using bottled water for cooking, drinking, brushing my teeth, and other activities since.  I didn't want to take any chances with me being pregnant and all.  It also didn't make sense to have the water tested until after our new septic system was installed.  Well, the test came back negative for bacteria.  Yea!  This means that we don't have to shell out even more money to have the well chlorinated.
We've seen some new wildlife in our yard and house lately.  On Sunday, we saw a skunk come moseying up our neighbor's driveway.  It went into the bushes beside their house.  It was at this point that we saw their cellar door open by the bushes.  Oh no!  We called our neighbors to let them know that they might have an unwanted and quite stinky house guest.  While Jim was on the phone with them, the skunk appeared once more and kept on walking and exploring the yards.  I hope it doesn't decide to take up residence nearby.  PU!  Jim came across a mouse in our basement the other night.  We bought some mouse traps and baited them with peanut butter.  The next morning, we found the mouse in the trap.  We're not sure if there are more of them, so we baited the traps again.  So far, no more mice.  I've been enjoying watching the finches at my new finch feeder and have managed to get a picture with both types in it.  I took it from my craft room window.  Our camera doesn't have the greatest zoom, so I cropped the pic.
Gold and House Finch at My Feeder 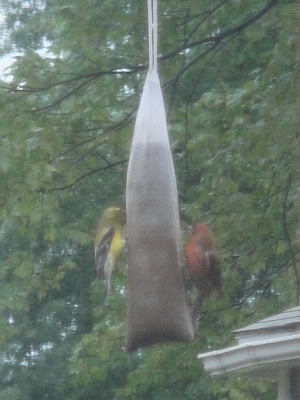 Sorry, it is a bit blurry.
Well, we've researched appropriate style/vintage newel posts for our stairwell landing and have decided that the best fit would be a box newel.  Unfortunately for us, this also seems to be the most expensive kind of newel post.  :(  Vintage/salvaged ones are just as expensive as new ones.  They can be upwards of $300 or more per newel.  We just don't have the budget for that.  So, Jim and I are playing around with the idea of making our own.  I'll keep you posted on what we inevitably decide.
This is the style box newel we like the best:

Whether or not we'll be able to replicate something like this is another story.  LOL!  Our's might end up being a little simpler since we do have to make 2 1/2 of them.
If you are interested, I have recently added 2 new entries into the Spirit Watcher page on this blog.
Enjoy!
Posted by Amanda at 7:16 PM