I think we must have gone crazy, but we can blame my FIL for that. ;)  When he was over one day to help Jim level the hall ceiling, he asked Jim if we ever thought about knocking down the wall at the top of the stairs.  I don't know why, but Jim and I had never thought of doing that.  It is a small wall that is in no way a support wall.  It was just the other side of a closet. When previous owners rented out the upstairs, they built walls surrounding the top of the stairs and made a doorway to the right of the stairs to basically create a divide between the renters and themselves.  The renters would have no need to come downstairs because they had their own "apartment" upstairs that included a kitchen, bathroom, 2 other rooms, and their own private balcony and staircase to the outside.  This is sadly the fate of many largeVictorian homes.  We are in the slow process of reverting the home back to its more original state of being a single family home.  The outside stairs to the second story has long been gone before we even bought the house, but the upstairs is still sectioned off from the downstairs and the upstairs kitchen is still very much a kitchen.  Anyways, we discussed it and have decided to knock down the wall.  It is basically a now or never thing.  So, we aren't done with demolition like Jim had stated in the previous post.  LOL!  The wall itself isn't the problem.  It is the fact that if we take the wall down, we would also need to remove the upstairs stairwell ceiling and wall to the left of the stairs in order to have the total ceiling level upstairs.  This would increase the original projects scope and would delay our project completion date.  Any delay is a big thing since we have a definite deadline now with the impending arrival of the baby.
Before Shots of the Walls
The 2 green walls in this picture will be removed as well as the ceiling. 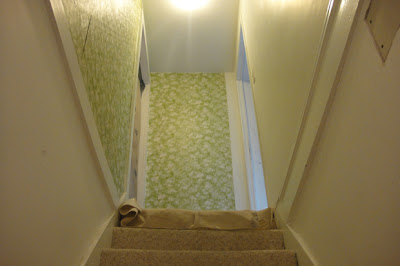 In case you were wondering, the green wallpaper also has a gold glitter embedded in it.  Jim says this is the worst wallpaper in the house.  I disagree.  I feel that title goes to the pilgrim wallpaper in the family room with images of muskets, barns, beehives, and so much more on it. : p
This doorway  to the right will also be removed. 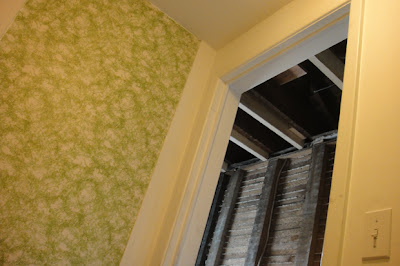 This is the wall from the other side.  Jim had removed a corner closet as part of the original plan already. 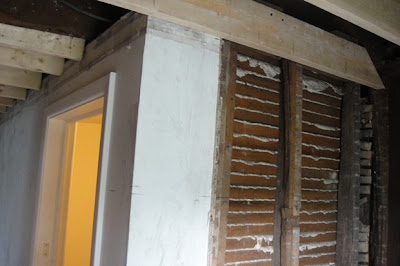 We were planning on building another closet in its place, only better. 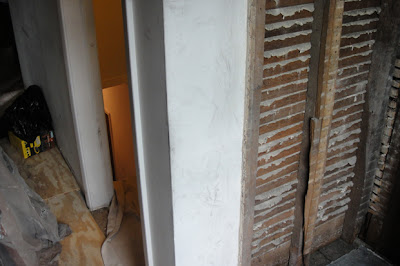 After Shots of the Small Wall and Doorway Removed
Bye-Bye Wall! 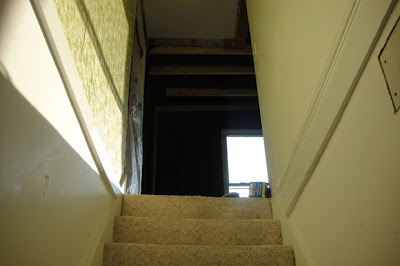 The light from the window really lights up the stairwell now.  I keep thinking I left the downstairs stairwell light on.  LOL!  That window will definitely need some type of shade or light filter.
Removing that one little wall and doorway has really opened up the space! 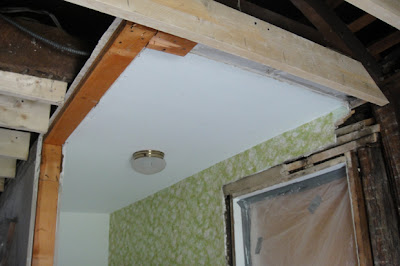 Because our master is right there, we have temporarily (once again!) made a make-shift bedroom downstairs.
We were smart this time and brought our mattress downstairs to sleep on.  There was no way my pregnant self was going to sleep on an air mattress for an extended amount of time.  ;)
You can see where the wall and doorway used to be in this pic. 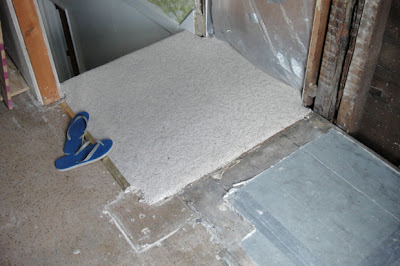 It will be much easier bringing stuff up the stairs and around the corner now.
Since knocking down the stairwell ceiling and other green wall will require scaffolding, that demolition needed to wait for another weekend.
Posted by Amanda at 4:58 PM