The road to electrical inspection approval

First and foremost, I have been appointed to show off the new curtains from the exterior of the house. From outdoors, you can see the sheer back layer Amanda talked about earlier. Behold, curtains: 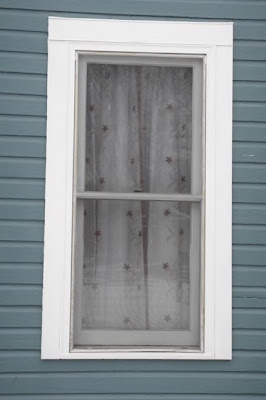 I may have mentioned previously that we have been doing some renovation in our second story. Before installing the insulation and drywall upstairs, we needed to pass a rough electrical inspection and address any major findings. However, the conclusion of the essential electrical work has been prolonged for various reasons. The primary cause of delay is a dramatic increase in my professional workload, which has been quite demanding both mentally and physically. We also had a surprise vacation to NYC for a movie premiere in November; what an incredible yet brief trip! Another factor was the process of framing-in the new closets for the bedrooms. After finishing the construction, I was able to wire the closet lights and one additional outlet receptacle. Happily, this phase is complete and both closets are plumb and square.
However, an unexpected delay was encountered while investigating the lighting in the second story hallways. We intended to redesign the hallway lights in order to have three switches to control the lights. Not too big a deal since the studs are exposed, and my dad and I were able to run wiring for one of the 3-way switches and the 4-way switch during all our work in October. While completing the hallway lighting circuit, I looked into the lighting circuit in the stairwell. These lights were connected to one of the chaotic sprawling networks from the basement. The mess behind the two 3-way switches looked something like this:

I suppose we shouldn't be too surprised, but I was nonetheless. The second story switch (shown at left) had several apparently unnecessary wires terminated with tape only. In the box were three different types of wire, including 12/2, 14/2 and a single 12 gauge wire, and nothing was grounded in the metal box. The first story switch (right) was entirely different wiring, indicating that there is a hidden/secret junction box sealed in the wall or ceiling somewhere. The neutral for the first story lamp was 'borrowed' from a receptacle in the adjacent room - I hear that this is called an 'illegal substitution' in football terms. You can see the cloth-insulated wire and the duct tape added for extra flavor. Elsewhere, I found a splice in one of the runner wires simply buried in the attic insulation. After a more thorough investigation, I traced the network back to the source and found the following savory sight: 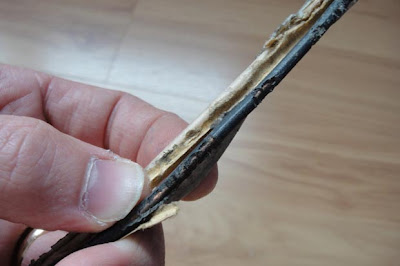 In conclusion, the stairway lighting circuit was entirely unacceptable. I isolated the circuit and essentially turned off the lights. The wiring for this network has now been entirely replaced and is supplied from the new second story circuit breaker. I was able to run the new 14/2 and 14/3 wire with minimal intrusion in the stairwell walls, and Amanda installed one of the new 3-way switches.
We had our rough electrical inspection nearly two weeks ago. I was anticipating that the inspector would spend some time and scrutinize my work, but he was done within 10 minutes. With only minor findings, we can close up the walls and continue with the renovation. I just need to find enough time and energy to keep at it.
Posted by James at 11:46 PM