On Memorial Day weekend, my dad came up and helped us with some of the yard work that included removing the hedge stumps along the west side of the house, pruning lilac bushes, and placing weed barrier where the stumps used to be. 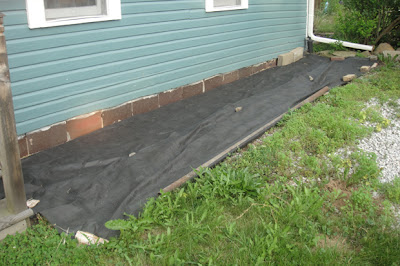 On Independence Day weekend, Jim's parents came up and helped us with a couple outdoor projects as well.  While Jim and his Dad worked on the upstairs hallway, Jim's mom and I worked outside in the flower bed.  We first spread mulch on the weed barrier. We then ended up going to a local nursery, Lowe's, Home Depot, then back to the local nursery before we had everything we wanted.  The cement urns were way too heavy for me to handle, so the guys helped us out with that.  Here are the end results of our afternoon hard labor. 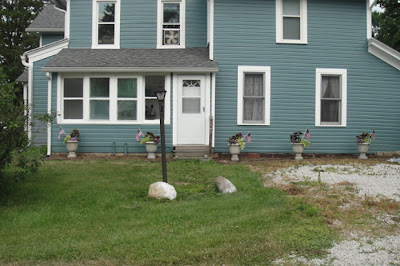 These look so much better than the over-grown hedges that were there when we first moved in. 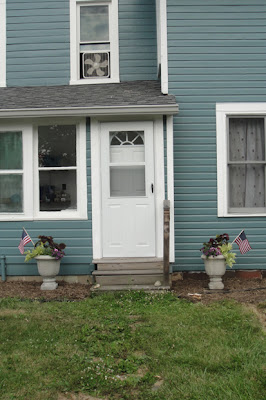 The planters really bring out the side door entry.  Too bad we don't really use it yet.  We'll see if I end up having to put a sign on the door directing people to the back door.  :) 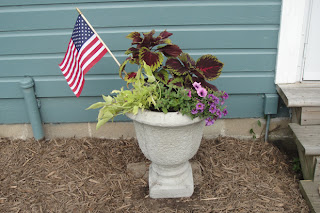 A close-up of one of the planters.
The plants inside are Coleus, Confetti Purple Cleopatra Petunias, and Potato Plants
We also created a little oasis in the small bed by the back door. 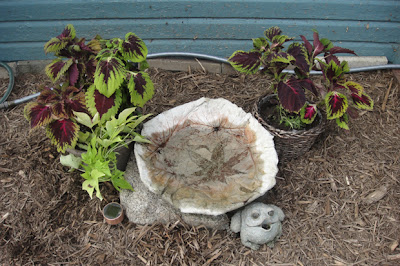 Unfortunately, I've already had to move the 2 planters since it was too much sun for the Coleus to handle.  I have since placed them on the front door stoop where they will get more shade.
My father-in-law replaced our old back door entry light with this more appropriate one. 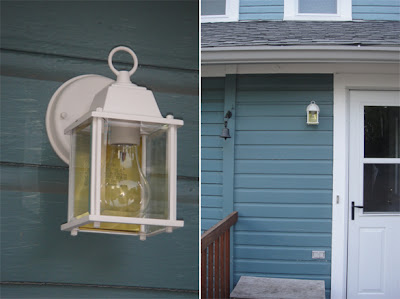 I didn't like the old one since the bulb stuck out the bottom.  This one is a little small for the space, but it will due for now.  We originally had bought it to use as a second light outside on the upstairs balcony, but have since changed our minds.
This chipmunk looks guilty already of destroying my flowers. 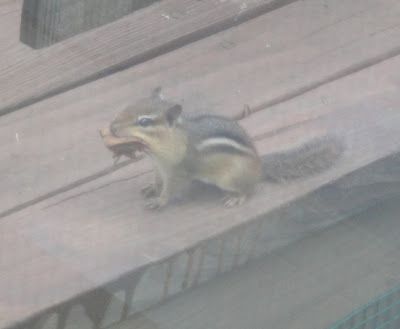