Nearly a month ago now, Amanda and I spent some time mapping out each circuit controlled by the primary (basement) circuit breaker panel. After this initial investigation, we concluded that there are some wild and elaborate networks sprawled throughout our walls. For example, one breaker was helpfully labeled "washer" by the prior owner; we learned that this breaker controlled: (A) florescent light in the kitchen, (B) front door lights and outdoor outlet, (C) overhead light/fan in the dining room, (D) lights for the staircase, (E) vanity light, ventillation fan and GFCI outlet in the downstairs bathroom, (F) only one of the outlets in the library, (G) everything in the second story master bedroom, and (H) the back door doorbell!

Yesterday afternoon I started a small project to rewire two of the downstairs rooms. The goal was to consolidate all outlets in the library and my office/den onto one 15A breaker, and properly ground all outlets. The majority of the project went well. We were able to fish new romex wire through preexisting holes, and establish a common ground path for all outlets. However, one of the outlets in the library proved to be quite the puzzle. To start, I tried to yank out the old wire & conduit from the basement ceiling, while Amanda fed a new line into the wall. After some effort though, we were obviously stuck. Investigation turned into a bit of excavation, unearthing more wires. Looking in the wall, we can see the conduit going up from the basement (to who-knows-where), a cloth insulated cord coming down, and a 4" length romex wire connected to a two-wire appliance cord going down (to who-knows-where). This newly discovered enigma is now electrically isolated, and temporarily on hold. It will take some intrusive investigation to figure out just what is going on, but I suspect that there is a secret junction box buried inside the wall somewhere in the library. Sounds like a treasure hunt to me. 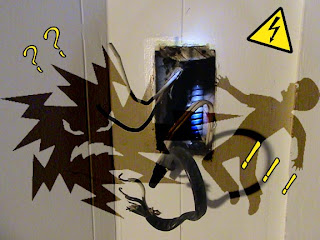