Let the Walls Come Down that Separate You and Me

Woo!  Last week was a grueling week, but I think I've now recovered.   I have plenty of pics to show you our progress as we tore out the plaster walls and ceilings in the nursery, guest room, and part of the hallway.  However, I wanted to finish what we did in the attic.  We did manage to remove most of the blown-in insulation from the attic floor over the guest room and nursery.  The only other new discovery we made was some charts that look like they belong in a butcher shop.  They are diagrams of the various cuts of meat for a cow, pig, and lamb.  There were also some posters of various types of cows.  They are labeled with American Angus Association and F. C. Murphy.  Maybe I'll try to google them and see if they are worth anything.  While we were working in the attic, Jim made a hole large enough in the nursery ceiling for the trash bags full of insulation to pass through.  As you can see in the pic, our nursery was pretty full of bags by the time we were through.  We also learned to double bag everything, or they would explode on impact when tossed out the 2nd story window.  Bleh!

Friday, Oct 1st
After our dumpster arrived, we got straight to work.  Jim took a vacation day for Friday and the following Monday to allow us extra time for demolition. We started with the nursery ceiling. By the end of the process, I had decided that tearing out plaster ceilings was my least favorite part of demo.  No matter how careful, or what type of goggle PPE we were wearing, rubble would somehow get in our eyes.

This is what the ceiling looked like after we were done.
Saturday, Oct 2nd
We had a late start on Saturday so we were only able to tear out 1/2 the wall separating the nursery and guest room, and 1/2 of the guest room ceiling.  The wall that we did remove will be where the new closets will go.

That is quite a growing pile of lath we have in the nursery, eh?
Monday, Oct 4th
We were able to get a lot accomplished on Monday.  We removed all the plaster from the guest room walls, and were also able to remove the lath and insulation from one entire wall.

You can see the various stages of demo in these 3 pics.
Tuesday, Oct 5th
This was the first day I was all alone.  I was quite the busy bee and was able to remove all the remaining lath and insulation from the guest room walls.

Since I was going to start on the nursery the following day, I threw out the giant pile of lath that was in the center of the nursery.  When Jim came home, he moved some of it onto a tarp in hopes of moving it to the firepit later. 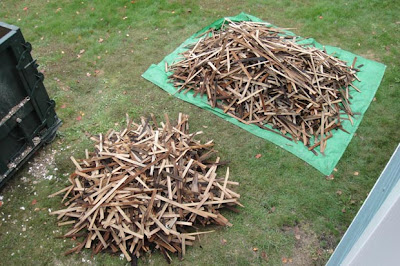 While I was working on the area by the east window in the guest room, I made quite an interesting discovery.
Can you guess what I found buried in the wall?
a) Gold coins
b) Blue prints of the house
c) Human bones
d) Lingerie
e) Dead animal
If you guessed a, b, c, or e, you would be wrong.  That's right, folks!  I found lingerie balled up in my wall!  There was also some baby clothes and a little girl's dress.  I have as yet to take a picture of them, but when I do, I'll post it.  When I first saw the clothing, I was a little apprehensive because it was balled up in the wall as if something was bundled inside.  My first thought (which was quite morbid) was that I was about to find the remains of a baby.  Fortunately, that was not the case.  However, this still begs the question of why you would purposefully leave lingerie in the walls?  OK, I can sort of see the baby clothes as a timecapsule-keepsake-legacy-thingy that you'd want someone years from now to discover...but lingerie?!  That is just nasty and disturbing!  And if you wanted to leave it as a legacy-thingy, why would you not at least put it in a bag to protect it?
Wednesday, Oct 6th
Day 2 of being on my own.  I was able to remove all the plaster from the nursery walls.  You can see the fan in the first pic that I used to blow all the dust outside as I was working.  By this point, I was starting to get quite tired of my respirator; but it was a necessary evil.

Thursday, Oct 7th
Come Thursday, I was starting to feel like this demolition would never end.  I did manage however to remove all the lath and insulation in the nursery, except for one area in the southeast corner.  I did not find anything else remarkable hidden in the walls.

Friday, Oct 8th
Yea!  Friday had finally arrived!  This was my last day of demolition by myself.  I managed to remove the remaining lath and insulation in the nursery as well as the lath from the one hallway wall.  Since we are moving the upstairs breaker box from the guest room to this hallway wall, we decided to demo it too while we were at it.  When Jim got home from work, we ripped up the carpeting and threw it out the window.  I have a feeling that that green carpeting will never be green again.  It was quite dirty and dusty by the time we were through.
These are pics of our newly exposed wood floors (most likely pine). 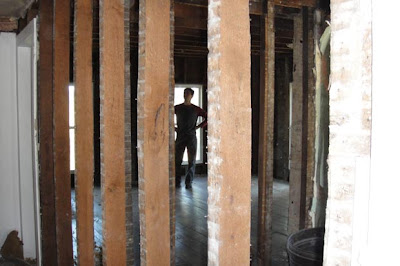 Saturday, Oct 9th
I just want to say that I was skeptical of this plan from the start.
Jim wanted to try to use the lawn mower to drag the tarp full of lath to the firepit.  I had my suspicions that the  pile was too big, but Jim wanted to give it the old college try.  The only thing Jim was successful at was pulling the grommets out of the tarp.  LOL.
We switched to Plan B after that, which was attaching the dump cart to the lawn mower and taking the lath back in multiple trips. 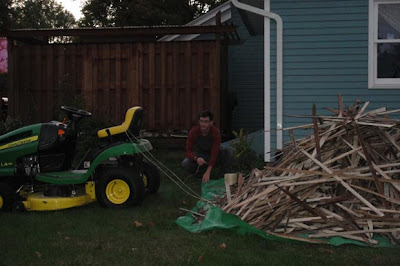 Randomness
Here are pics of the only 2 new flowers I have blooming now.

It is quite sad.  I think at this point, I have more weeds blooming than flowers.
Jim was recently in the basement and saw this little fella on our cellar door stairs. 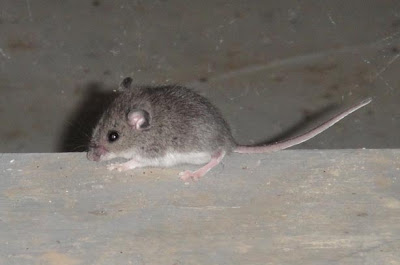 That very night, Jim was on the family room floor playing video games when he saw a mouse scurry past him.  The next day, he went out and bought some mouse traps.  We have since captured 4 total using peanut butter.  We can't really take credit for the 5th mouse...or maybe we can...
I know this is a little disturbing, but I couldn't help but laugh; It just seemed so comical.  After they took away the dumpster, we went out to inspect the damage to our lawn.  Lo-and-behold, there was a squished mouse where the dumpster had been.  He was pretty flat.  The part that made me laugh though was not this poor mouse's fate, it was the way he was positioned.  He was on his back, all four feet in the air, with his head turned to the side and his mouth open.  The only thing needed to complete the picture was his tongue hanging out.  Honestly, he looked just like what a cartoon animal looks like when they die.  I took a pic, but later decided to spare everyone the image.
After Saturday's bonfire and mystery (see Spirit Watcher tab), Jim and I were in the family room reading.  We both looked at each other when we heard a strange howling/barking coming from outside.  We cracked open one of the windows to hear better.  It sounded like an entire pack of dogs, but not quite dogs.  The sounds seemed too high pitched and strange to be dogs.  We decided that maybe there are coyotes hunting/living across the street in the farm fields and vacant lots.  This is even more reason why I want to fence in our yard. 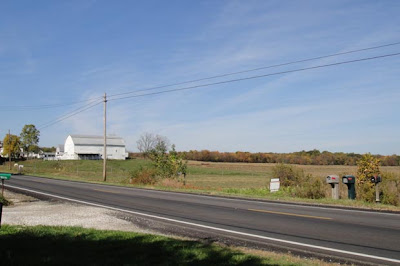 This is a picture of the farm across our street.  I love the view.  It looks even more serene in person.
Left:  Me posing by the mimosa tree/bush before leaving for a luau themed company clambake.

Right:  I just like this picture of Jim I took recently.
Yes!  I've finally finished!  I hope you like the update.  I was too tired to blog during the demolition week, so it kept building up.
Toodles, Noodles!
Posted by Amanda at 11:20 PM