As you know, we have started a major project. We have stripped-down, dismantled, and thoroughly gutted two of the bedrooms and a hallway wall in the second story. The majority of the prior electrical wiring was unceremoniously discarded with the rest of the debris. Now it is time to stop destroying and start creating. Well, perhaps there is a little more demolition yet to do.

My father and I spent nearly the entire weekend rewiring the two bedrooms. I am very grateful that my dad was and is willing to help us out, his knowledge and experience are extremely valuable. Plus, many of the applicable regulations in the NEC are practically indecipherable due to the language or context. I think that there are a few good puzzles involved in any project, and it was great to have another engineer to help riddle them out.

Starting with morning coffee and notes, we assembled our resources and made a plan of attack. Phase Zero: Drink coffee.

Moving on. Phase One: Install load distribution panel & splice the service drop. After some carpentry, I was able to mount the new circuit breaker panel. Dad worked on the splice in a separate junction box up in the rafters.

We had considerable trouble with the insulated neutral bar in the GE panel. I was surprised that the plastic stand-off feet were so slim and brittle.The spring tension of the 2AWG service line was enough to snap one of the feet in half. My anguish doesn't shown in the following photos.

When I turned my back, dad took out part of a wall. We intend to build-up new closet spaces in this area. Removing this partition now sure makes it easier to get around with the ladder. 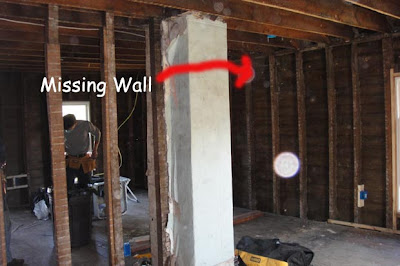 We made decent progress the rest of Saturday. All of the receptacle and switch boxes were mounted, as well as the overhead boxes for closet lights, ceiling fans and smoke detectors. Phase two - complete. We were even able to run a few lines before we collapsed with exhaustion. 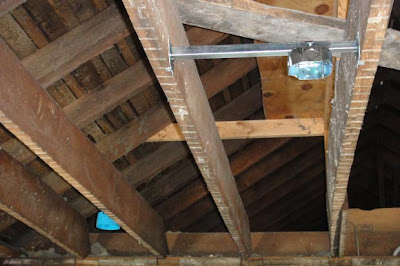 We started working again half-way through Sunday. Phase Three: Run wire. Much of our time spend pounding staples into beams and routing the lines to outlet boxes and junction boxes. Here is a good picture of me pretending to do some work. 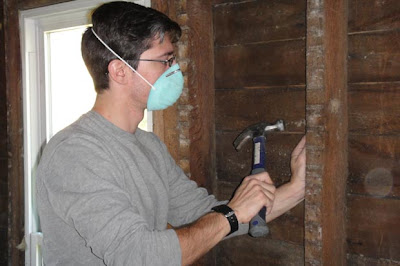 And here are some photos of dad really working.

The branch circuits were being defined as the various boxes scattered around the rooms were connected. The receptacle boxes look a little haphazard with all the leads hanging out, but soon enough we were starting to terminate them and populate the boxes. 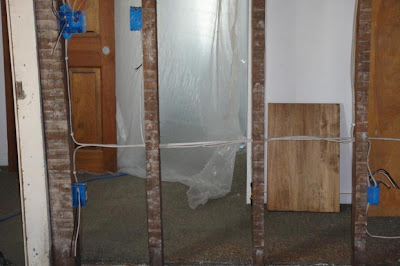 Which leads, at last, to Phase Four: Termination. After supper, dad set to work on the circuit breaker panel. The photo below show the branches that he expertly crafted into a clean and orderly distribution panel. I was able to finish-up the light switches & fan controls and most of the receptacle outlets before quitting time. Once the branches were terminated at the circuit breakers, we engaged the external main breaker and tested the network. A piece of the preexisting network is supplied on a separate breaker, and I guess we shouldn't be too surprised that it did not entirely behave as expected. For whatever reason, the lights and outlet in the bathroom are not energized with the rest of the circuit, I have some investigation to do. 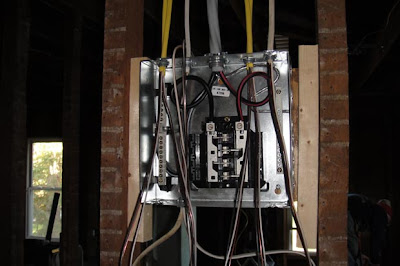 When my dad left, there were only two receptacles yet to terminate. Amanda and I took one each and mounted the outlets. We did a lot of good work this weekend, and made substantial progress for our renovation.
Thanks dad!
Posted by James at 1:31 AM