Jim and I have started to look into hiring an arborist to figure out what if anything we need to do about the huge silver maple tree that is between our house and garage.  I had researched area arborists and tree service companies and narrowed our choice down to 3.  I decided to go with Ash Tree Service, Ohio Tree.com, and Tree Masters for estimates.  The first two have already come out and given me estimates, but the third company hasn't bothered to reply yet.  I found it interesting that the 2 that did come out gave me totally opposite opinions about the tree.
Ash Tree Company was the first to come out.  He took a good look at the tree and told me that if it was him, he would take the tree down.  The tree has extensive rot near the base, and it is spreading.  He says there is no real cure for it and that it is inevitable that the tree will come down one way or another.  I had him examine the sickly looking red maple in the middle of the yard, and he told me that the tree is dieing most likely from a parasite.  I had him look at a few other trees on the property, but he said they all looked good.  The only other thing he would do would be to trim some of the branches hanging over the roof of the garage from another red maple.  To take down the silver maple (including grinding the stump), remove the dieing red maple, and to trim the other red maple branches above the garage; he gave me an estimate of $3,500.
Ohio Tree.com came out the same day, but later in the evening.  He had told me over the phone that he would be here around 5:30 pm, but didn't actually show up until about 7:00.  I saw him pull into the drive and take a quick glance at the big tree while walking to the side door.  The first thing he said to me was, "Is that the culprit?  Eh, it's fine."  My first thought after hearing that was, "What!?  How the heck would you know?  You haven't even properly looked at it yet!"  I kept quiet though because I wanted to see what else he'd say.  We took a closer look at the tree, and he also pointed out the rot, but he told me not to let that scare me.  He said the tree is fine and that he would recommend using suspension to hold it.  He was really encouraging the suspension, but I honestly don't feel comfortable with that.  The tree has obvious signs of a past suspension that has since broken.  I asked him about removing the tree and he wasn't too keen on it, but said he would if that was what we wanted.  To get a comparable quote I asked him to include trimming the branches above the garage and removing the sickly tree.  All together he said he'd estimate $3,250.  He then went to his truck to write up 2 estimates.  One for removing the tree, and one for using suspension; however, he was out of estimate forms.  He then told me that he would email me the estimates the next day.  That was 2 days ago, and I still don't have the estimates.
Hmmm...I think I'm leaning towards the first guy here.  The Ash Tree Service guy was very professional and actually listened to what I wanted.  He was also the owner of the company and has been in the tree service business for 30+ yrs.  I think we'll give the 3rd company until the end of the weekend to chime in their opinion.

Jim and I in front of the Silver Maple 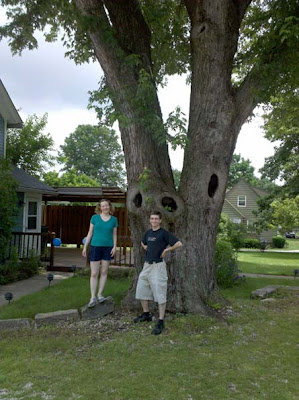 Doesn't it look like it has a face?
I really wish this tree was further back on the lot.  I hate to have to cut it down, but if it is rotten...I just don't want to take the chance of it falling on our house, the garage, or our neighbor's house.  I've done some research, and it seems the life expectancy of the silver maple is ~130 yrs.  One of the arborists estimated our silver maple's age at 150 yrs.  It will be interesting to count the rings.
In other news, we had our septic tank pumped this morning.  We went with the company that the previous owners had used.  We ended up liking this company better than the one that did our original septic inspection while in the buying process.  This new guy was very friendly and willing to answer all our questions.  We learned more from him than from the original septic guy.  It turns out that we don't have a septic tank with a leach field like we were originally told.  We have a 1,000 gal septic tank with a leach well.  He said that leach wells are better than a field because if something goes wrong with the well, you can just get it pumped out.  That is not the case with a leach field.  Our septic tank does not currently have a riser cover, so Jim had to dig up the spot where the tank was so that the septic guy could pump it.  He recommended having a riser installed and Jim and I agreed.  They are coming back out tomorrow to install it.  This way, if we need to get to the septic tank, we don't have to dig up the yard to get to it (that would suck in the winter).  He also told us that the system looks ok for one its age.  So, now that I don't have to worry about a leach field, I can plant my garden anywhere I want.  Yea!
Posted by Amanda at 1:27 PM