From Hiccups to Snowball Fights

I mentioned in a previous post that Jim has poison ivy and is currently on medication for it.  The prednisone is working but proved to have an annoying side effect...frequent and persistant hiccups.  It seems whenever Jim would eat, drink, or cough, the hiccups would start and be difficult to stop.  Fortunately, this only lasted for the first 3 days or so.  This did allow us to try different hiccup remedies.  Among the various remedies that we tried, we can attest that the following work:

1. Taking small sips of a full glass of water without breathing.
2. Sucking a lemon.
3. Placing a knife (handle up) in a glass of water.  While drinking the water, prop the knife handle on your forehead.
3. Drinking a shot of apple cider vinegar.
I think Jim's least favorite was the vinegar.  Unfortunately for Jim, we didn't realize that he filled a double shot glass to the top until after he drank it.  O.o  Oops!  On the bright-side, that was the last of his hiccups.  lol.
A couple days ago, Jim showed me a web-comic about nature.  One of the baby birds was named Bertrand. Jim thought the bird was female, but I said the name sounded more male.  We made a bet, and I won!  Bertrand is a boy's name.  Woot!  Since Jim lost, he was in charge of making dinner that night.  Jim's culinary skills are quite lacking, so we went out to dinner at a new restaurant.  We didn't realize until after we ordered that they only took cash or check.  Seems kind of odd that they don't take credit, but whatever.  Anyways, Jim neither had cash nor his checkbook.  This meant I had to pay for a dinner (so much for winning the bet).  Jim felt bad, so the next day he took me out again for dinner.  We went to this secluded, romantic restaurant called Arby's where we ordered Beef 'n Cheddar sandwiches.  I guess I shouldn't expect any romantic home-cooked meals in my future, unless I'm the one to make them.  : /
The other day, I was feeling silly so I decided to try to instigate a snowball fight.  Jim wasn't really into it though; I think he just played along to amuse me.  You are probably wondering, "Amanda, how the heck could you have a snowball fight in May?!"  Well, I'll tell you.  Over the weekend, we had a big storm blow through, and it broke off 2 large branches from my snowball bush.  I felt bad for the big puffy blossoms on the broken branches.  I decided to put them to use in a "snowball" fight.  One last hurrah for the snowball blossoms.  Come on, I'm sure I'm not the first one to think of that.  ^_^  I don't think of myself as crazy, just free-spirited. : P
Jim and I have finally physically started my craft room shelving.  First, we had to buy the lumber at Lowe's.  It is too expensive to just buy ready-made shelves, so Jim and I are going to make them ourselves using our dads' miter saw and router.  It was cheaper to buy 2 large planks of wood and have them cut them to size at the store.  After the cutting, we still had a decent sized plank of wood leftover, but we thought it would still fit into my Saturn.  We were wrong.  lol.  I laughed, but Jim was annoyed and embarrassed because he had to go back into the store and ask them to cut the plank smaller.  When he came back out, the plank fit, but just barely.  We played around with the router until we found a bit that I liked.  Jim has it all set up now.  We just need to do it.  Hopefully I'll have shelving on my walls by the end of the month. 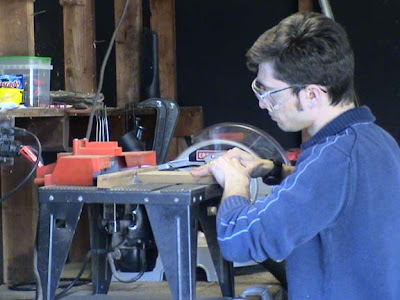 Jim practice-routing
Oven Update:  The repairman came this morning.  Apparently, our heating element is broken.  He didn't have one in stock, so it is on order.  He is supposed to come back out next Tues morning to install it.  The repairman was friendly and talkative.  It turns out that he was my age and lived in Litchfield too when he was younger.  This just proves to me that this is a small world afterall.  Not only might I have met the repairman when I was younger, but also our neighbors behind us.  The husband is a cop in the town I graduated high school from, and he used to chaperon the school dances and police the football games when I went there.  The wife was also a teacher at the middle school.  Funny how things turn out.  I don't remember any of them, but it just goes to show that you'll never know who will come back into your life.
And of course, here is a new blooming flower.  It seems like I find a new one everytime I go outside. 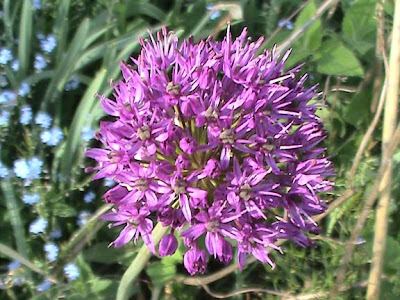 Our appointment with the real estate attorney is this afternoon.  We are on good terms with our neighbors regarding the easement, but we just want clarification of what rights we have, and what their rights are as well.  I'll try to blog about it tonight.
Toodles!
Posted by Amanda at 12:41 PM