Half-way through June, Amanda told me that the clothes washing machine was not operating as it should. After running a normal load of laundry, an abnormal puddle would be all over the floor. Hoping for a quick and easy repair, I opened the machine and watched for the source of the leak. Unfortunately, the seal at the very core of the drum dribbled during agitation and streamed during the spin cycle. If I were to spend the time, energy and money to repair the seals and bearings of the 10+ year old machine, in the end it would only be a temporary fix. After rigging-up a band-aid to catch the discharge, it looked like we were in the market for a new washing machine.

We have previously discussed redesigning the basement laundry station; however, that plan was supposed to be further down our project list. The current washer and dryer were arranged such that it was difficult not to drop a wet sock on the dirty cellar floor. The two machines were practically 15 foot apart, due to available plumbing and ventilation connections. In order to make the laundry center more accommodating, we intended to arrange the units side-by-side near the current dryer location.

A dedicated 15A breaker was already run to a receptacle for the dryer, so no further electrical work was required. However, some plumbing would be necessary in order to extend the hot and cold lines, as well as route the expelled water to the corner sump pump. Before this though, we needed to build-up a level concrete pad where the new machine would sit. 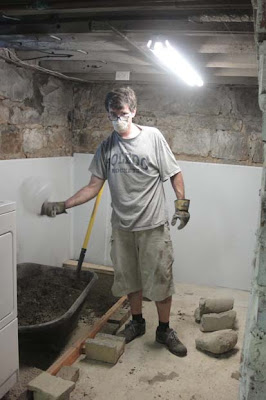 Jim pretending to be hard at work. 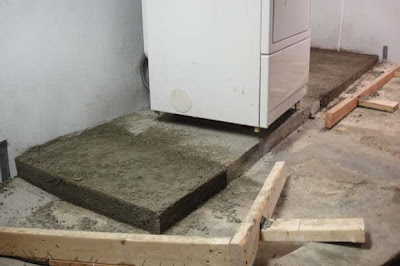 New cement pad pretending to have always been there.

We wanted to create a clean work space for the new laundry center, and adhesive-backed vinyl tiles looked like a perfect flooring solution. After studying our options, and building a mosaic collage on the floor at the hardware store, we picked out two complimentary tile patterns for a checkerboard pattern. Both tile patterns look like flagstone, and provide a clean yet natural look. As a finishing step, vinyl baseboards and stair nosing will be applied to the borders and the edges of the raised pad. Surprisingly, laying-out 12x12in stickers on the ground takes a good bit of time and energy! 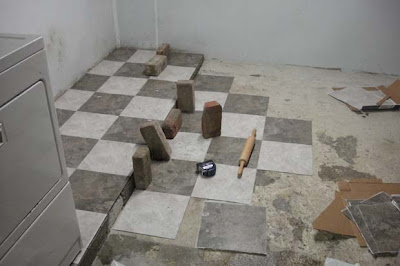 New floor tiles pretending not to be completely awesome.

I needed a few new tools and some new skills in order to tackle the plumbing aspects of this project. After some research and some practice, I was able to piece together the new hot and cold lines. The appropriate valves were soldered in place and the whole assembly was connect to the existing plumbing. The exit plumbing was more easily accomplished with standard drain parts and PVC pipe. With no evidence of leaking joints, the plumbing system was ready for connection to a new wash basin and washing machine. This straightforward plumbing job was a good introduction and an engaging puzzle; I think I would be comfortable doing this again. 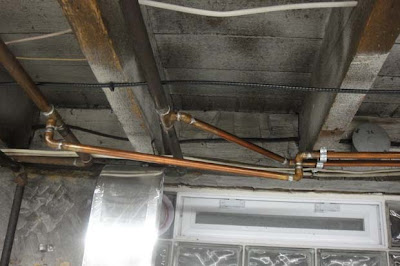 Old pipes pretending not to notice the new pipes.

We actually ordered a new washer and dryer, in order to replace the aged and mostly functional units. An honest-to-goodness shop, Daly's Appliance, delivered our sparkling new Speed Queen washing and drying machines. They connected the units and made sure that they were working properly before hauling-away the old faulty ones. Let me say that these guys were great! Over the following weekend, I fussed with the dryer ventilation. After adding a second overhead fluorescent lamp, our new laundry center was fully functional and ready for work! 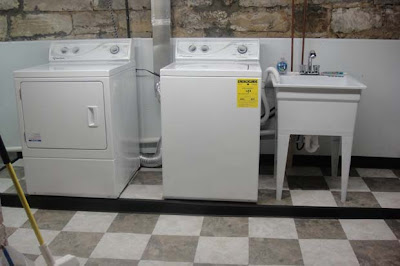 Speed Queen washer and dryer pretending not to be kings of laundry.

While this project was not on our priority list, it presented a good challenge and I learned a few new tricks along the way. The result is a proper work station that should serve us well in the future. 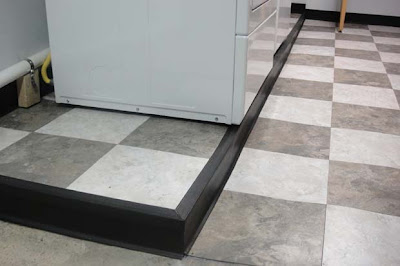 The finished product doesn't have to pretend whatsoever. It is great!
Posted by James at 12:06 AM