*If you want things to make sense, you might want to scroll down to the post titled "Hooray for New Septic Systems!" and read up the blog.  If not, you will end up reading backwards through time if you start with this post.*
Here is how our Independence Day holiday weekend broke down:
Saturday
Jim and his dad designed and built the scaffolding for the stairwell while Jim's mom and I worked outside with the new planters that I wrote about earlier.  I was pretty impressed with their design.
Here is the scaffolding. 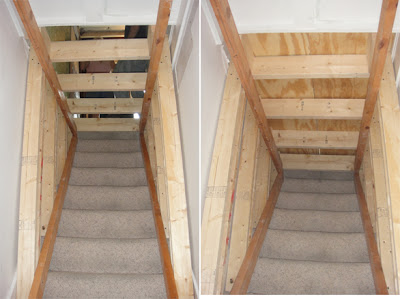 The individual beams across the top in the pic on the left can be removed for people to go up and down the stairs.  I referred to them as the "pregnancy barrier," since I can't get up the stairs unless the final beam furthest from the camera is also removed.  I could probably climb over it to get upstairs, but there is no way I am going to climb back over it to go downstairs.  I don't feel like taking the express way down.
At some point, Jim's dad suggested removing the other 2 walls surrounding the stairwell.  This has been an idea I've brought up to Jim before, but he has always come up with reasons not to do it.  These other 2 walls are not original to the house.  They are walls previous owners put up when creating the rental space upstairs.  I believed that there originally used to be a guardrail surrounding the stairwell opening and not walls.  Jim's dad agreed with my theory.  Now that my FIL was on board with the idea of removing the walls, Jim decided to give the idea more thought.  This is another "now or never" project, so it does require a lot of thought.
*Pros to Removing the Walls*
~the space would really open up and be easier to move things around
~there would be more light in the hallway
~the hallway is currently super narrow already and would become even more cave-like after we finish leveling the ceiling and floors
~we would be bringing the home back to its more original state
~the area would be airier/breezier
~we most likely wouldn't regret taking the walls down in the long run, but might regret not taking them down when we had the chance
*Cons to Removing the Walls*
~Jim would have to redo some of his rewiring that he already has done
~we risk not finishing everything before the baby arrives
~children might decide to either try to squeeze through the landing spindles, attempt to climb the guardrail, or decide to toss/drop things down the stairs between the spindles.
~this would cost more $ than keeping the walls
Sunday
Jim was still debating with himself whether or not to remove the walls still, so Jim and his dad worked on other projects upstairs including more electrical, framing in a small corner closet with triangular built-in, and framing a future linen closet that won't be fully created until the bonus room/upstairs kitchen is renovated.  Since I wasn't allowed up there still during demolition, I'm not sure of everything they did.  I know of one casualty, though.  Jim accidentally dropped a tool in-between the wall.  It dropped all the way down to the first level, so we won't be able to recover it until we remodel the family room...and who knows when that will be.  LOL!  Poor Jim.  At least it wasn't an essential and/or expensive tool.
Monday (4th of July)
Decision day!
Our final decision was to remove the walls!  Yea!  I am over-joyed!  :D  I am so glad Jim has finally seen that it would be so much better in the long run if the walls were gone.
*Happy Manda Dance!*
Jim's parents and youngest brother (Eddie) came out to celebrate the 4th of July as well as helping out with demolition.  They once more closed themselves upstairs via the scaffolding and got to work.  I remained downstairs and went along with my business of updating this blog.  While the guys were destroying things, my MIL was mudding the drywall in the guest room and nursery.
Here are some pictures of the hallway/stairwell.
Before 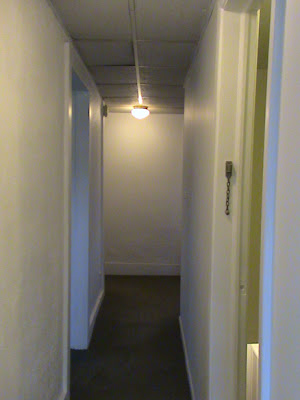 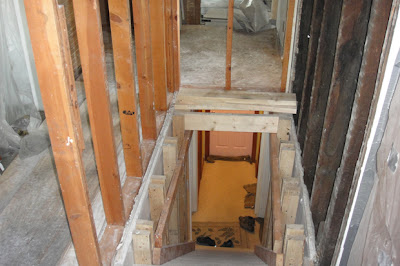 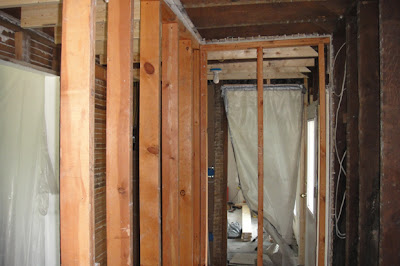 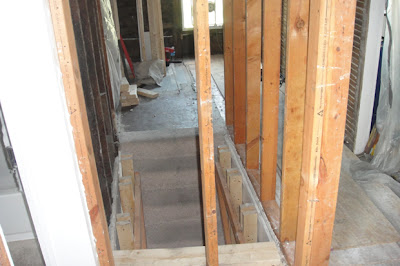 After the Stud Removal
Looking up from the stairwell 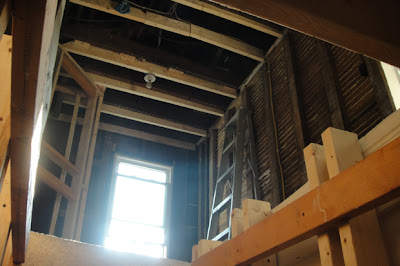 Looking across the stairwell 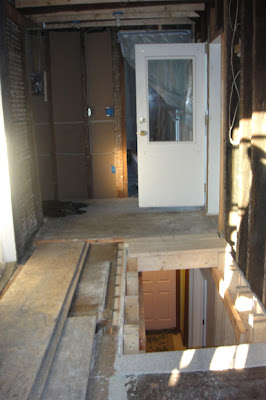 That is the balcony door that is open that used to lead to exterior stairs for the renters.
View from the nursery doorway 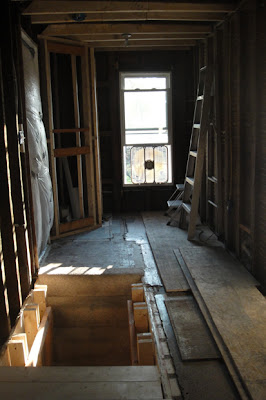 The door covered in plastic leads to the master bedroom 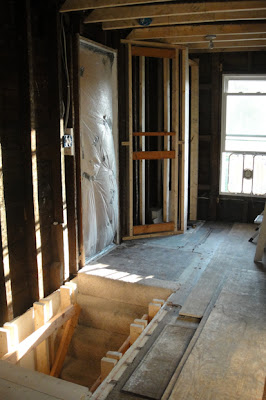 Looking down the stairwell 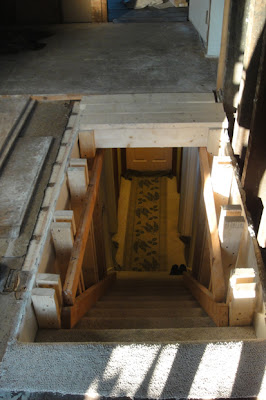 If you look to the immediate left of the stairwell on the floor, you can see where the old newel posts and spindles used to be before the walls were erected.  It's sad.  The original guardrail and newel posts were probably thrown out.  :'(  We're currently on the hunt for new newel posts and spindles that are in our budget and look Victorian-esque.  We will need a total of 2 1/2 newel posts (the half is for the newel post that will be against the wall) and about 30 or more spindles.  Current code wants spindles to be no more than 4 inches apart to prevent children from getting stuck between them or slipping through them.  I measured the distance between the original spindle marks, and they were 6 inches apart.  In the meantime, we will close off the hole in the floor with the scaffolding when we are working up there to prevent anyone from falling off the edge.
If anyone knows of newel posts and/or spindles for a decent price, please let us know.  We will end up needing about ~10ft of guardrail.  The guardrail needs to be a total of between 34 to 38 inches in height to be to code.
Here is a picture of our corner closet and built-in so far 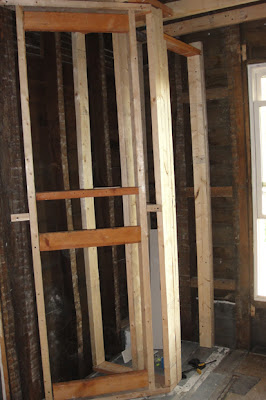 The closet won't be very big, but it will be able to hold a vacuum cleaner and other cleaning supplies.  The triangular built-in will consist of a cupboard on the bottom, a fake drawer in the middle, and open shelving on the top.  The shelving will hopefully be too high up for a toddler to try to climb it.  It would be nice if the cupboard doors had glass, but that probably wouldn't be a good idea with small children.  *Sigh, sacrificing for them already.*  LOL!
And, that is where we stand in our upstairs project.
Posted by Amanda at 7:27 PM